Three Counties Asylum Cemetery is located away from St Luke's chapel and away from the main building. It is located at the end of Elliot Way. The cemetery covers a very large area although in some parts you would not know it is there as not many grave stones or markers  are visible today.

The cemetery consecration took place in 1864 by the Bishop of Ely, a very elaborate ceremony took place with many of the dignitaries connected with the asylum present. Both patients and staff were buried in the cemetery although it does seem that staff graves were in general separate from patients graves.

By 1897 over 2000 people were interred  within the cemetery and the area was declared full,additional burial ground space was needed, This was found on a disused piece of land at the rear of the now full cemetery. After permission was granted by the lunacy commissioners and the diocese offices the new ground was consecrated, although the ceremony was much less elaborate as the original.

Only a few headstones still stand on the original cemetery site but many wooden markers can be found under the rows of bushes that run the length of the now grassed field which was the second cemetery.

The graves of nurses, the Coachman, the Bailiff can still be seen today as these are large head stones which were an expensive item in their day, Private patients and those with the means to pay for a decent and respectable burial were placed in the cemetery along with many pauper lunatics .

Many of these pauper people had no means of paying for a headstone or respectful burial, their funeral was paid for by the poor law unions.When pauper people were buried they were given a simple grave marker with a number on it. The Victorian markers were made of cast iron and only had one number on them. Only one of these markers remains to be seen in the cemetery today.

After many years of neglect the cemetery site was cleared and most of the cast iron markers were scraped. They had been pulled from the ground and scattered around the area,Many of the later wooden markers can still be seen if you look into the bushes, these markers can have up to five numbers on them suggesting five people were interned in very deep graves!A large modern memorial is planned for the cemetery later this year (2013) 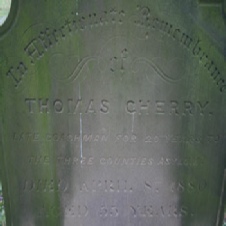 Close up of Thomas Cherry Headstone. Late Coachman for 20 years to the Three Counties Asylum, 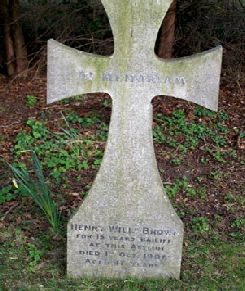 Henry Will Brown, for 15 years Bailiff at this Asylum. Died 1st Oct. 1906 Aged 47. There was a massive court case over this mans death. His widow sued the hospital because Henry died of Typhoid contracted through the water supply

{see Artefacts for the story behind this marker} 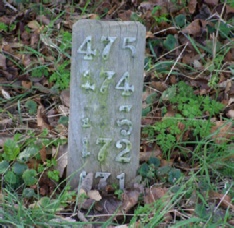 Wooden Grave Marker of a later date, many of these markers still sit under trees and bushes.