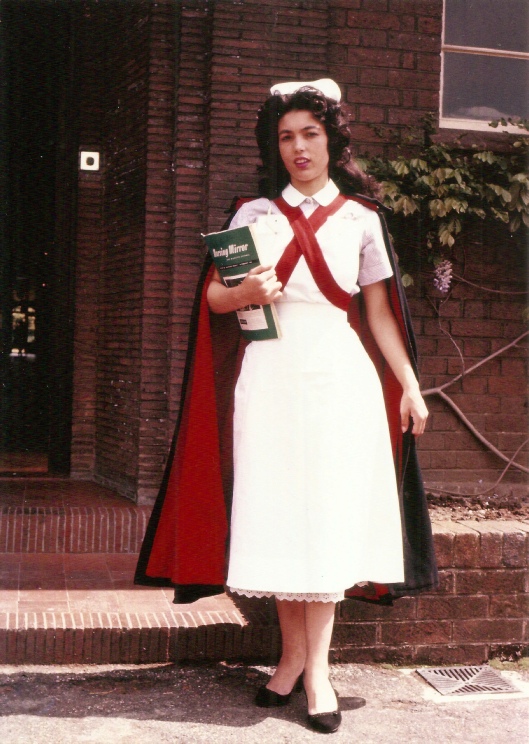 Josefa came to England in 1954 and learned nursing at the Three Counties Hospital ,he studied and worked hard and eventually received her nursing certification

Josefa worked in the Female wards and lived in the women's dormitory on the second floor ,She remembers there was a phone in the hallway, and bathrooms at each end,She also remembers the murder by Lyndon Nott of Nurse Veronica Ryan in May 1958, She was working long hours on the night shift during the time of the murder

Unfortunately after her shift had finished and  she had to walk through the cemetery to get back to her dorm, this she found very scary. Her boyfriend was naturally worried about her and came to walk her back to her quarters whenever he could, it was a fearful and worrying time for the nurses and they tried never to walk the grounds alone, the girls were afraid of being the next victim.Some nurses would walk to the store of bicycles and use those ,but , at the time of the murder, Josefa would only take the bus to go shopping as nurse Veronica Ryan had been attacked while with her bicycle.

There were some Italian girls that worked in the hospital kitchen, Josefa got on very well with these girls and often enjoyed going out with them on shopping trips.

Many times Josefa would be alone on the night shift in the wards, her desk sat in the hallway, She remembers she would always hear crying from the rooms.

There was a large room with many beds where many of the women slept. One time josefa fell asleep at her desk and a patient came up to her and got hold of her around the neck with a pair of stockings, the patient was bigger than she was, (Josefa is only about 5' 1"), the patient tied her up and locked her in a room, the patient told her that she liked her and so wouldn't kill her. The patient was caught the next day.

There were  young girl patients in the women's ward too, Josefa felt particularly sorry for them, and would separate them from the grown women and take them for walks  She would bring them much loved treats from the kitchen when she could,There was one girl that she, and soon the rest of the staff, began to suspect wasn't insane

They felt she had been framed for her mother's murder by her own father, an investigation began but Josefa left in 1959. She wishes she could remember the girls name

Josefa remembers the young girl crying for her mother, and being so lonely and sad all the time

As she  was only about twelve years old and would love to know what happened to her. Josefa loved working at Three Counties, She says it was :

“The most rewarding and interesting work I could imagine , it was a beautiful place with dedicated staff. “