Thursday 26 February 2009 was a red-letter day for the Robey Trust.  It was the day when, after 24 years in the care of the Launceston Steam Railway, the Trust’s second acquisition (after Stumbles the Tandem roller) came home to Tavistock, the last of the Trust’s engines to be reunited with the rest of the collection, all of which is now housed in  ‘The New Perseverance Ironworks’.  I will commence this article by referring to an account of the acquisition of this stationary engine, originally published in ‘Rumblings’ No. 5 Summer 1985.

“Its existence first came to my notice in an article in the “Stationary Engine Research Group” Bulletin Vol. 6, No. 2, Summer 1984, which explained that at Fairfield Hospital, Stotfold, Hitchin, Hertfordshire, there was a disused Robey horizontal single cylinder engine of 1905, No. 24462.  The cylinder, 11¾” bore by 2’ stroke is cast integral with the pedestal on which it sits, bolted at floor level to a huge block of stone for a foundation, and continued forward to the main crankshaft bearing that also has its own pedestal.  The engine is fitted with Robey’s patent drop valve gear, described in detail in literature of the period.  The flywheel is cast in one piece and is 8’ diameter on a 5” diameter crankshaft.  The drive was taken by a 9” wide belt running on a 5’ diameter pulley to an overhead lineshaft, where further belts drove two sets of pumps and laundry machinery.  One set of pumps remains.  The hospital needs to expand its laundry facilities and so the engine, last run 5 or 6 years ago, had to go.

I wrote to the hospital requesting that the engine be donated to The Robey Trust.  At first the hospital administrators were reluctant to let it leave the area but as, after several months, no suitable home could be found locally, it was offered to us.

Mr. Nigel Bowman, proprietor of the Launceston Steam Railway and myself made our first visit to Fairfield Hospital on Wednesday 17th April, 1985 (calling in on Kempton Park Pumping Station on the way, a most impressive installation of steam pumping power) to photograph, measure, plan the dismantling and removal procedure, and to unscrew all brass parts, lubricators and name-plates, the “collectors items” which disappear whenever an engine is known to be destined for removal.

The second visit was a three-day dismantling session (7-9 May).  The crankshaft, flywheel and pulley were found to be inextricably fastened together, so, using hydraulic jacks and a ‘sylvester’ (a chain hoist) these were raised 1’ as a unit after removing the main bearing caps.  This allowed the cylinder and trunk guide assembly, the continuation of which is the ‘bayonet bed’ casting (ie one single casting forms the trunk guide and an ‘arm’ taking the thrust of the piston to the main bearing on the crank disc side and which is itself part of this casting) to be raised 2”.  The foundation bolts, 1½ “ diameter, were then cut, the steam and exhaust pipes removed and the cylinder/trunk/bayonet/bearing assembly pulled towards the door on rollers. It was not possible to raise the cylinder any further or the flywheel any more because the outer bearing is situated in a wall-box, ie a casting set into the brickwork of the engine house wall, while the pit the flywheel revolved in provided only minimum side clearance for it.  To enable the flywheel to be removed, the pit had to be cleared away on one side to a depth of 2’, so that the rim could be slewed sideways and up in an arc to ground level.  Unfortunately the pit side at this point consisted of the foundation of the main bearing, a solid stone block.  Wielding sledgehammers, we couldn’t even chip bits off it.  Consequently, the largest type of electric hammer made was hired at a nearby town and the rest of the day was spent in slowly reducing the stone to gravel, a most exhausting task that lasted well into the night.

The third day was spent in removing the overhead pulleys and line shafting, and making the pump ready for lifting as a unit, an attractive 3-throw A-frame pump driven by herringbone gears.  Thus, the Robey was left for a fortnight until transport was available.

The next visit to Fairfield was made by Nigel on his own, in his Unipower timber tractor with winch and crane, as I could not absent myself from work.  The loading was not without incident.  While pulling the flywheel across the floor, the floor gave way and the flywheel settled into an underground cavern that no one knew was there.  Fortunately, it was a brick-lined chamber half full of debris and so the downward progress of the flywheel was arrested.  On extraction, and loading onto the lorry, the cranes on both the lorry (a 3 ton Hiab) and on the Unipower were strained to the limit,  indicating that the flywheel/disc crank/crankshaft/pulley assembly weighs almost 5 tons.  The cylinder/bayonet bed was successfully loaded and the whole engine was delivered safely to Launceston.  We still need to make a further visit to Hitchin to recover the wallbox by chiselling it out of the wall.  [A task which we never actually did.]

I must conclude this article by thanking Mr R G Hunt, the Hospital Administrator for his generosity in donating the engine to us, and to Mr Shepherd, Hospital Engineer, for all the help and assistance rendered to us by himself and his staff.  We must also thank Nigel Bowman for the superhuman efforts expended to secure this beautiful engine for The Robey Trust and for his museum.”

That’s what I wrote in 1985, all but a quarter of a century ago. Interesting thought, that.

The rescue of the engine left us with many memories: finding the place and seeing the massive, high-security dark perimeter wall; the security (we had to be locked in the engine house for our own safety …) but the disturbing scenes we witnessed when collecting/returning keys to the lodge; the superb meals in the deserted staff canteen; and weird stories such as, …. the staff who eventually go mad and become patients themselves.

The engine is now at the Robey Trust at Tavistock, Devon and is fully re-erected and restored but there is no steam supply yet. There is a website - google Robey Trust.

This month we have a great photograph and article about the old Robey steam engine that was saved from Fairfield Hospital and probably  the scrap-man! a Big thank you to Dave Davies and Chris Allen for their article and photograph. 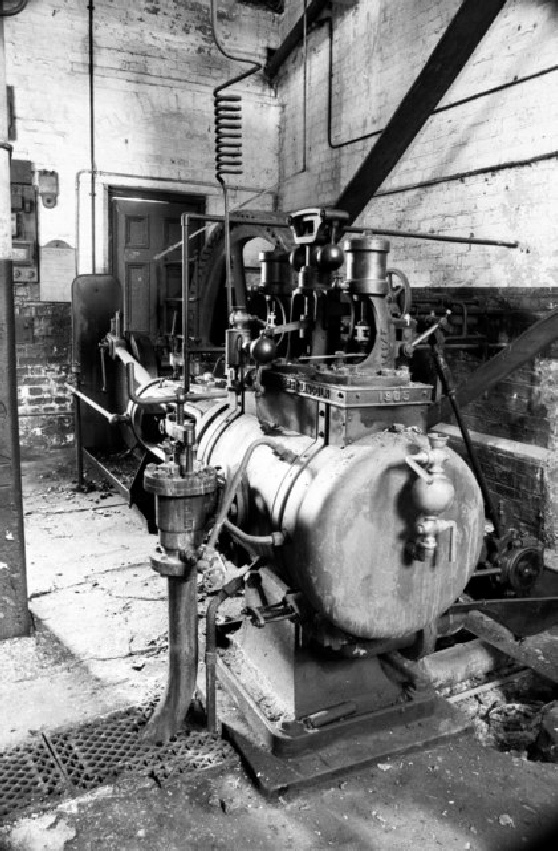 Barrie visited the Robey trust at Tavistock in late August this year (2014)  to see ,amongst other things, the TCA Robey engine 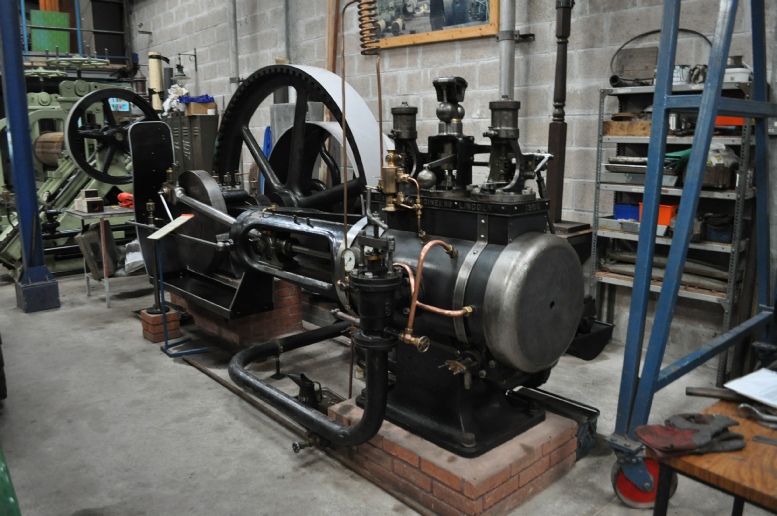 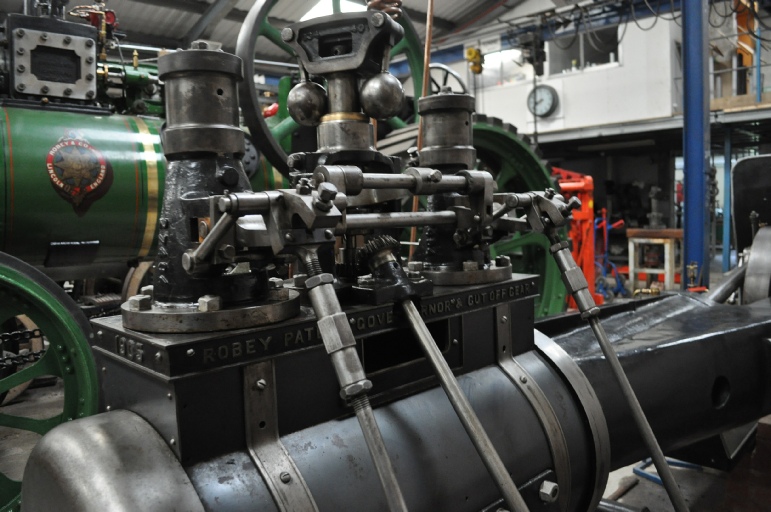 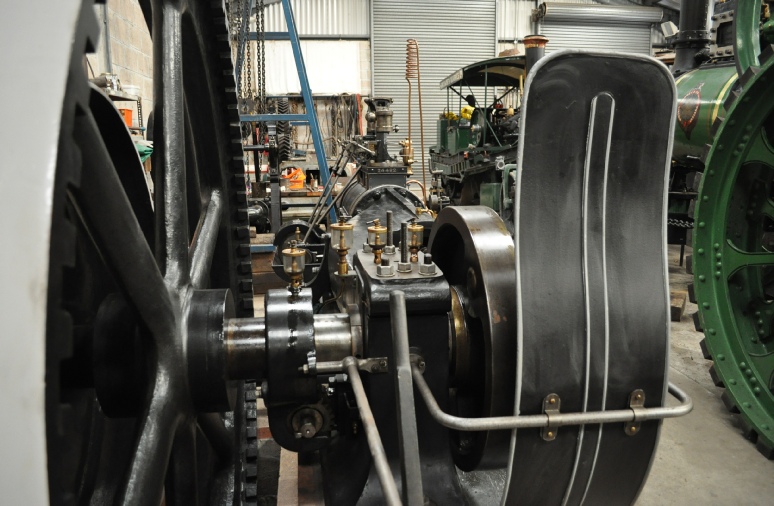