I don't pretend to be an expert or a great historian, the best source to read in my opinion is

A PLACE IN THE COUNTRY - By Judith Pettigrew, Rory W. Reynolds and Sandra Rouse.

This book is out of print but with a little searching a copy can usually be found.

In 1837 Hertfordshire and Huntingdonshire started sending their lunatics to the Bedford Asylum. This was built in 1812 with a capacity for forty patients but it was running out of room for the living and the dead. In 1852 a survey was commissioned with recommendations for improvements to the old Asylum, a report was prepared which stressed the importance of moral treatment which called for a therapeutic environment, good food, fresh air and exercise. It was a fact that the Bedford Asylum was no longer capable of providing this sort of treatment and care. The improvements and alterations were proved to be too costly for the old building and a committee was formed to draw up plans to build a new Asylum.
Originally Cambridgeshire wanted to join with Herts, Beds, Hunts, It was agreed in 1853 that an Asylum would be built for the four counties but by the summer of that year Cambridge had got impatient with the other three counties and would not give in to the Bedfordshire committee's demands of not wanting to move the Asylum out of town, they also wanted compensation if that happened for the loss of income. An agreement could not be found and Cambridge dropped out.
This left Herts, Beds, Hunts to go ahead with plans for the new Asylum which would be called "Three Counties Asylum."In 1856 George Fowler Jones was appointed architect for the new Three Counties Asylum, He had built the new Cambridgeshire Asylum on the outskirts of town at Fulbourn. {see pics below taken 2007} 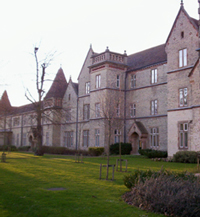 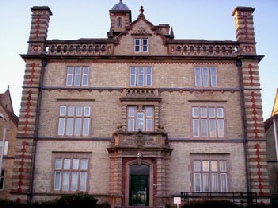 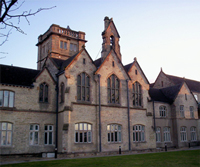 The committee looked at two local sites, the first at Cadwell Farm in Ickleford near Hitchin second Arlesey Rectory Farm . In a report it was stated that Arlesey Rectory Farm was not suitable because of the heavy character of the soil which was unsuitable for a lunatic Asylum, bearing in mind the soil would have to worked and farmed. Cadwell Farm had great possibilities, light workable soil and an ample supply of water, it was near to the Great Northern Railway and had beautiful surroundings, however there was no flat area on the 170 acres sight to build a large Asylum. It was felt by the commissioners of lunacy that the land at Cadwell because of its un-level nature would create problems in supervising patients when working outside.

Land belonging to Major Wilkinson of Stotfold was inspected and found to have everything the committee was looking for, light and good soil, gentle slopes with plenty of space to build an Asylum on the 200 acre site.
On the 10th March 1856 £11,000 was paid to major Wilkinson for his 200 acre site, another 50 acres were purchased from Great North Railway to connect the two sites, this was to become the Arlesey drive and tramway.
In June 1856 the site was clear and ready to start work, On the 1st of May 1857 William Webster of Boston Lincolnshire started work on the new Asylum, He set up his sheds and workshops along the east side of Stotfold Road. After a short ceremony the chairman of the building Committee, Marlborough Pryor, turned the first sod of soil, Webster started work on the foundations and a new Asylum was born.
it would take three years and nine months before the first patients could be moved from Bedford Asylum to their new home.