The Three Counties Asylum was a very self sufficient institution producing practically everything it needed for day to day running.

It had its own farm growing crops etc but it also held and bred its own livestock including pigs chickens and cattle.

livestock breeding in those times could be difficult as nature basically had to take it’s own course, the vets of the time did not have the technology or knowledge they have now to help as much so occasionally there would be still or difficult births .

Nothing could have prepared the farmers for the shocking birth of this calf.

It was born with Two heads!

Fortunately for the the calf it was still born but how fortunate for us  that one of the staff members took this amazing photograph to record this very rare but disturbing event.

Then a few weeks after the show a copy was given to us by the same Gentleman who’s Grandfather worked at the Asylum in the late 1890's. 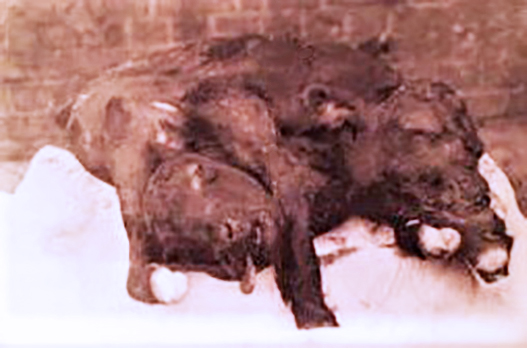